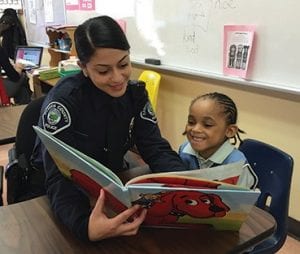 But unless something big is going down, the 26-year-old officer is always at Bonsall Elementary School at the noontime hour on Wednesdays. He is there for his regularly scheduled appointments with Alex and Anastasia, both kindergarten students at the Whitman Park neighborhood school.

On a recent visit, he met with his young charges separately for a half hour each. They read “Curious George” and drew pictures of the Man With the Yellow Hat and houses while engaging in breezy conversations about favorite ice cream flavors, adventurous monkeys and pet goldfish.

The hour passed quickly. Although when he first volunteered for the job, Leaming admits, he was nervous it wouldn’t go so smoothly.

“I didn’t really know how to deal with kids all that much,” he said. “But it gets easier.”

The weekly meetings will continue throughout the school year and, it is hoped, make a lifetime impression. Leaming is one of 15 officers involved in PACER, a pilot program launched by BookMates in November in cooperation with the Mayor’s Office and the county Police Department.

Besides the proven benefits of reading to young children, the goal is to develop relationships between the Camdenbased officers and youngsters who often do not see law enforcement officers in such a positive light. Bonsall is located in one of Camden’s most dangerous neighborhoods.

“When the kids get a chance to see you in this environment, they get a chance to know you personally,” said Leaming. “They come up to you. They want to see the car, this and that—rather than just looking at you and being scared of you.”

BookMates, a literacy program co-sponsored by the Jewish Community Relations Council and the Catholic- Jewish Commission, connects nearly 300 volunteers to read with some 600 children in 34 low- and middle-income neighborhoods.

With the county police department’s new emphasis on quality-of-life patrols and building one-on-one relationships with community members, the BookMates mission was a great fit, said said BookMates Director Rhonda Shevrin, who credits both Camden Mayor Dana Redd and Police Chief Scott Thompson for their commitment to the program, which is sponsored by Townsend Press in memory of Henry H. Nadell and Marjorie Nadell Schneider.

In fact, with recent tensions between police and communities in New York City and Ferguson, MO, Camden came into the spotlight as a city that is making positive inroads. Some 27 members of the international media spent time observing BookMates earlier this winter, she said.

For Officer Gabrielle Camacho, 22, BookMates is wonderful for all the stated reasons, but what she looks forward to most every week, she said, is “it’s just to see them look so happy when we’re with them.” .